The Challenger Society’s name and its origins derive from the expedition that is acknowledged to mark the start of the systematic study of the oceans on a global scale.  The scientific legacy of that expedition is found in the samples collected, the several volumes of Challenger Reports  and the data they contain and in the published literature. 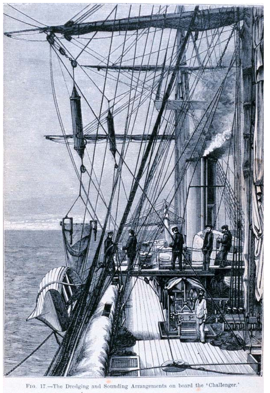 Since that voyage in the 1870s, our knowledge of the oceans has increased hugely through the efforts of research groups from many nations and through international collaboration. Until the advent of micro solid-state electrics, and then the launch of earth-observing satellites, observational techniques changed little in the almost 100 years since the Challenger voyage.   The subsequent advances, within our present lifetime, have been dizzying and the many research groups in the United Kingdom have made important contributions.


The Challenger Society’s Special Interest Group on History was re-launched in late 2016 with the general objectives of raising and sustaining interest in the history of UK marine science and, more specifically, of documenting and capturing the recollections, unpublished documents and memorabilia of present-day scientists.

This web site reflects the activities of the History SIG but also builds on and links to similar efforts based on the work of individual laboratories, on archive collections and on publications in the open literature.

The task is a daunting one and is thus focused initially on carrying out and encouraging the following :-
-       Making available the biographies of scientists who made important contributions, and encouraging active scientists to record important aspects of their careers.
-       Documenting technologies that were important stepping stones towards our modern-day capabilities
-       Preserving, enlarging and enhancing the photographic record
-       Ensuring that important artefacts and documents are preserved and adequately documented
-       Preserving historical data
-       Documenting these activities in publications and talks.

We encourage people to join the SIG and to let us know their interests and areas of expertise so that other members of the Group can be made aware of them. The email of anyone who joins will be added to a JISCMAIL list whereby all members can communicate with each other (unless the person prefers not to receive emails that way).

Sadly, the postponed 2020 Challenger Conference to be hosted at SAMs from 6th September 2021 has also been cancelled.

NOC has received funding from West P&I to deliver a seagoing bursary to enable students and early career scientists, including from developing countries, to experience sea-going science.